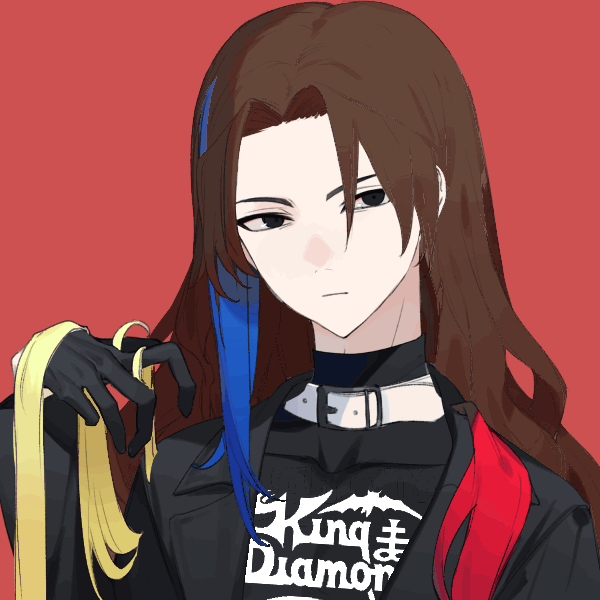 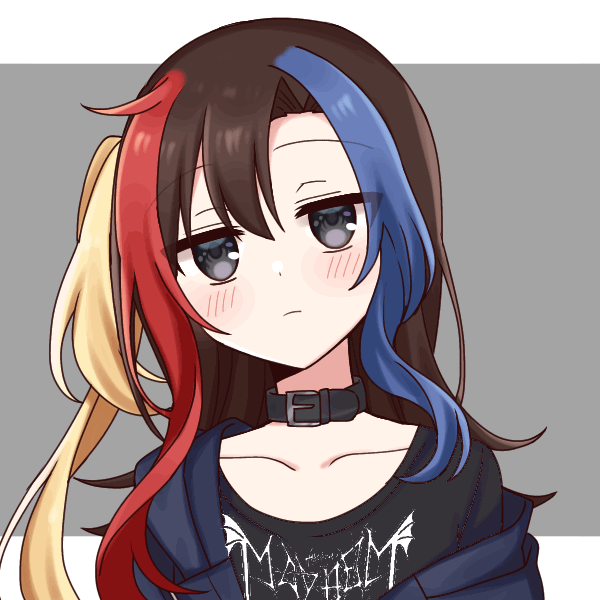 Click on the image to get to the Picrew it was made on!

Band shirts are very important for them!

Stumbling into Gensokyo from the human world, Trivia spent several days wandering around, eventually running into the Human Village. Once people noticed their odd looks, they started mistakently associating them with the Hell Goddess, Hecatia Lapislazuli. Despite denying that, and not even knowing who Hecatia is, they got curious and decided that the best course of action would be to ask the local fairies and youkai about her.

After some time of searching for someone who could give them more information about this elusive Goddess they have been looking for, some information finally turned up - from a fairy that came from Hell, Clownpiece. She took them to her guardians, Hecatia and Junko, residing in Gensokyo at the time.

Seeing Hecatia have a similar style to them, including a t-shirt which looks like something they would wear at home and an abundance of chains and accessories, they started warming up to her slowly. Since they started to integrate into their new home in Gensokyo alongside the trio, they also started to pick up distaste towards Lunarians. Additionally over time, they started to realize that their personality matches with Hecatia's really well, even discovering their similar taste in outside world music, mostly through records Yukari's been smuggling for Hecatia from the outside world.

Over time, as their bond deepened, the two developed feelings for each other, culminating in them dyeing parts of their hair into Hecatia's three main colors - red, blue and yellow. They would also keep their style of outfits, no matter how outlandish to Gensokyo residents it may seem, just to match with their lover.

Other than spending time with Hecatia and the rest of their cohabitants, Trivia also likes to engage in talks about politics and spirituality with many of Gensokyo's authorities on the topics, such as Hijiri Byakuren and Kochiya Sanae, quenching their thirst for more and more knowledge of the world they've been thrown in.

Not too long after showing up in Gensokyo and seeing many different forms of magic and special abilities youkai and some humans wielded, Trivia felt like they may be able to learn one of their own. Thus, with a lot of perseverance and a little help from Hecatia herself, they acquired the skill to alter their own appearance, though not too drastically and for a very limited time only. For that reason, the only way they would be able to get anything out of it is if they shift their shape into a more feminine looking version of themselves. That way, the difference in looks is minimal, so they can maintain that form for a decently long period of time, much to the enjoyment of Hecatia - her own possession of multiple forms makes her really proud her partner can do something in the same vein as her trademark ability, the only difference being that they can't have both of them out at the same time, unlike Hecatia, who can have all three of hers. Maybe she even tampered with their powers so they would develop the ability they did? Nah, she would never do that... unless...

Whatever the case may be, since they can now change their appearance between two genders at will (as long as they have enough power left in them), they chose to use they/them pronouns while referring to them in general, while sticking to he/him or she/her to refer to a specific form of theirs. Oh, and since they already have a feminine looking shape they can take, they really want to try on some of the really nice and elaborate dresses they've seen around Gensokyo!

Trivia is particularly fond of music, the heavier, the better. They are a big fan of metal in general, having a lot of favorite artists. They also like to play a lot of video games in their off time, preferring really old games, mostly trying to find enjoyment in those that would be considered bad or lackluster, even by old standards.

They are also a very picky eater, mostly enjoying food they make for themselves. Spices are a must in most things they eat, as are hot sauces and hot side ingredients. Being a competent cook, they are often tasked with cooking duties in their new home, with Clownpiece especially liking their meals.

Amongst the few things Trivia can't stand are snow and big bodies of water. The former because of them always getting a cold as a child whenever they played outside on winter days, and the latter for the simple reason of them being unable to swim, something that they are really self-conscious about and try to keep a secret from everyone.

While at first they've wondered who this Goddess people of Gensokyo called "outlandish" and "weird", the two immediately clicked and started to warm up to each other. They share the same thoughts on a lot of topics ranging from simple things like style, to more complex ones like politics and personal freedom. The only thing that they disagree on is the general treatment of the Lunarians - while Trivia does not like the way they rule and govern the moon, they still want to see for themselves whether or not Hecatia and Junko were honest with their stories of the Moon folk or if they were exaggerating them due to personal issues. Music tastes too, while Hecatia is more into death and thrash metal, Trivia vastly prefers black and speed variants of the same genre, leading to some really pointless and heated arguments between the two on the topic.

As they helped them find a place to live, Trivia has a lot of appreciation and respect for the two. They like hearing Junko tell stories from Gensokyo they've never come in contact with in the outside world, and playing and looking after the mischiveous Hell fairy can be a lot of fun... in most cases, that is. Overall, the relationship between them can be described as positive, relying on each other for running errands and needing a person to confide in.

Trivia has always preferred to call themselves an agnostic, believing it's a bit arrogant to claim no such thing as divinity exists as an atheist, and that it's also a little backwards to cement your faith into a being or beings that may not exist at all in the end as a believer. Thus, talking about spirituality and religion with a Buddhist monk (and the fact that they have been thrown into the world where magic and deities are commonplace) has really opened their mind to a lot of new things.

The same thing can apply to Sanae, being a shrine maiden with the ability to perform miracles and stay in contact with the Moriya Shrine Goddesses. Additionally, since Sanae is another person who made her way into Gensokyo from the outside world, Trivia found a close friend in her during their first days in that new land, being able to talk about their predicaments and discuss some things that other people around them would not understand, such as technology and other entertainment media found beyond the border.